Trying to successfully solve the riddle of Avebury's purpose is much of what attracts us to it in the first place. I wonder if it would appeal to us in quite the same way if we knew, beyond doubt, the solution to the riddle. Throughout Europe are many magnificent cathedrals which are equally as awesome in conception, construction and demanding of manpower as anything our Neolithic forefathers have left us. However we know what cathedrals are, how they were built and the motive for building them, but apart from being some of the most wonderful examples of what religious belief can drive us to achieve they contain no mysteries. Avebury, though, in common with all of the many megaliths of the Neolithic period, is something that lies outside of our experience, its purpose still demanding an explanation by our modern, scientific minds. These days my personal attitude towards it is merely one of delight that it exists. I'm certain that the people who built it had a perception of life and sensitivity to nature that is now quite alien to us. I like to imagine that they were also very altruistic, a trait that the love of money has largely eradicated from our modern world. Considering these points I now accept that the 4,500 years of history since has probably rendered us incapable of finding a path that would lead us to the correct explanation of Avebury's many enigmas. Our minds are now, in a sense, corrupted with such a mass of knowledge that seeing the world through the eyes of the Neolithic people exceeds even our imaginations......We can go a short way but I think their motivation will always remain beyond our comprehension.

It seems amazing to me that we now consider ourselves to be living in the space-age yet we show a total disregard for the awesome beauty of the night sky by first filling the atmosphere with the by-products created by our insatiable desire for power and transport and then floodlighting the resulting pollution with an, often as not, waste of that same power we didn't need in the first place! We now need to travel to the remote areas of the world to obtain a sense of what our ancestors once took for granted and perhaps appreciate the huge influence the ever-changing and complex sky must have had on their lives. It therefore seems natural to assume that Avebury's builders would have been motivated to somehow encode all manner of astronomical alignments into their creations and almost impossible to believe that they wouldn't. In reality, though, any evidence that celestial events were the primary influence on the construction of the megaliths remains elusive. However such evidence isn't totally absent as rudimentary alignments exist at the coves which are orientated towards the solstices. There can be no great surprise in this for at a time when clocks and calendars didn't exist the extreme positions of the sun would have been the events that marked out each year for our ancestors. Some researchers claim significant alignments in the inner circles and evidence that lunar cycles have a strong influence on the monuments. Indeed the numbers of stones forming the circles seem to have lunar significance but with so much missing it is difficult to advance things beyond theories. The trouble with lines is that they all point to something and the number of permutations that can be derived from the positions of celestial objects and the stones at Avebury allow many options for imaginative research. With the advent of computers and a wealth of astronomical software it is now much easier to wind the clock back and visualize the night sky as seen by Avebury's builders. The effect of precession over the past 5000 years has been significant and recent literature makes interesting reading on this account.

Despite our assumption that we are something apart from the animal world the ever increasing contamination of the internet is unfortunate evidence that procreation and its attendant activity remains the fundamental force that drives us all. The part it played in the lives of Avebury's builders must have been no less influential so it would be surprising if there wasn't a sexual component evident in the enigma they have left behind. This is an aspect of the monuments that seems to be obviously represented and must be considered as one of the primary motives for their construction. It has been suggested that Silbury Hill is a representation of the huge pregnant belly belonging to a massive Earth Goddess figure....an idea that seems to fit the general ethos of the monuments.  Quite how the megalith builders perceived death still seems vague....Even including the long barrows its signature on Avebury's Neolithic monuments remains ill-defined and difficult to interpret.

When theorising about Avebury it is very easy to ignore the huge timespan over which the monuments were built and developed. Six hundred years cover the period from the initial building of the Cove in the Northern Inner Circle to the the final form of the henge when the avenues were added. At a time when the average lifespan barely exceeded 40 years it would seem far more likely that Avebury's construction was a process of evolution rather than the result of some "grand plan" the result of which would never be seen by its conceivers. It can't be discounted that the henge and avenues may have been "operative" in some rudimentary form ( ie.wooden posts) before being consolidated later by the erection of the stones, but any evidence that this was the case has yet to be found.

Many researchers become consumed by the positions of stones but ignore trying to explain the purpose of the immense ditch and bank which must originally have been truly awesome. It is also easy to ignore the existence of the hundreds of other megalithic structures that were constructed throughout the British Isles during the same period and to view Avebury in isolation. So much of what existed in the Neolithic period has now disappeared but each year pieces of the jigsaw are being rediscovered. Despite its importance amazingly little of the henge has ever been investigated and the surrounding fields must still hold many secrets. There is always the chance that something relating to the monuments might yet be found that dramatically alters ideas about them.

The quest for the "Holy Grail" of solving the Avebury mystery will no doubt continue far into the future as it seems a part of human nature to believe only what we want to believe and no matter how seemingly perfect a solution there will always be those who will remain convinced that it was something else. Each "solution", convincing or not, though, adds something to our knowledge of Avebury and it will be a sad day if we stop searching for the truth about this wonderful place....... Perhaps the only truth now is that it is what each of us wants it to be and therein will always lie the
power it has to capture our minds.

SOME LINKS OF INTEREST:

If you know of a site offering
theories relating to Avebury
please send the URL to the
author of this site.

Keys to the Temple

Faces in the Stones

Henge of the World

Speaking for the Ancestors

One of the best ways to keep abreast
of current "goings on" regarding our Neolithic heritage is to visit the
related forums on the
Modern Antiquarian website.
click here

Contains a wealth of Avebury related info and much else besides.

AVEBURY PANORAMIC TOUR
Visit Pete Glastonbury's site for loads of great photos and info
on recent events at Avebury.
Pete's CDs are a "must have" for anyone with a passion for Avebury 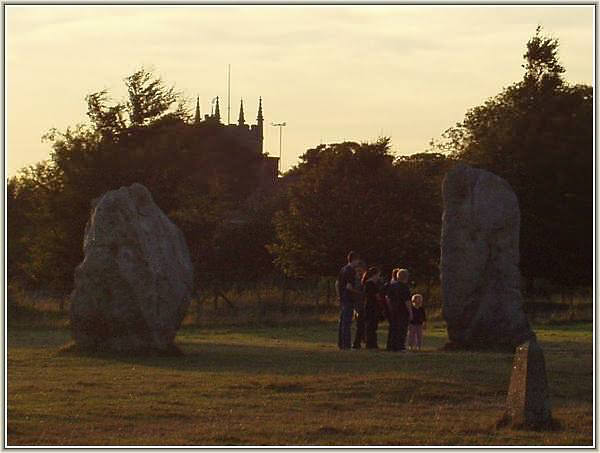 The ETERNAL IDOL has news and opinions
regarding ancient sites in the British Isles. 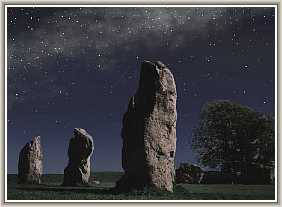 AVEBURY AT NIGHT
some fascinating photographs
by David Baldwin