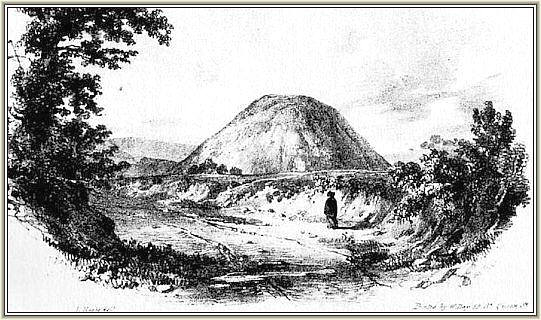 Surrounding the base of the hill is an extensive ditch which is elongated on the western flank. It is believed that it may have been deliberately filled with water when Silbury was first constructed. A number of tunnels have been dug into the hill commencing in 1776 when the Duke of Northumberland employed Cornish tin miners to sink a shaft from the top of the hill. This particular shaft seems to have contributed to a disaster for the hill when on May 29th. 2000 a large hole nearly 20m deep appeared on the summit. Although the various tunnels and excavations over the years have failed to produce any solution as to the purpose of Silbury they have revealed that the hill was built in three stages starting with a primary mound about 16 feet high and 120 feet in diameter. Accurate dating for the construction has proved difficult to achieve but carbon dating of some antler-pick remains recently found at the summit of the hill indicate that its construction was completed about 2500 BC which pre-dates the building of the avenues by about a century. The year of its birth may never be known with any certainty but evidence obtained from remnants of insects which were found in the hill's base layer indicate that the building of Silbury probably commenced during the month of August*. There is evidence that a substantial Roman building once existed adjacent to the base of the hill on its southern side and recent surveys have now revealed that an extensive Roman settlement surrounded the road adjacent to the hill.  Quite what the Romans thought about Silbury poses an interesting question...... they certainly used it as a marker when constructing the adjacent A4 road though it is hard to imagine that it didn't play a more substantial role in their lives at some time.

During 2007 a massive project to stabilise the hill has been undertaken. This is a result of the damage caused by the various tunnels that have left substantial voids over the years. The work has allowed archaeologists access to the hill's interior and much fresh information has been obtained as a result. Hopefully a more precise understanding of the construction and chronology will be the outcome*. A very interesting development has been the discovery of sarsens within the hill which suggests that it conceals a megalithic structure of some sort. It is considered that the remains of a stone circle might be one possibility.

Whatever motivated its builders Silbury hill remains one of the most astonishing achievements of that period. The amount of labour it required reveals that the population of the Avebury region at that time was large and able to form a cohesive work-force. If the purpose of Silbury could be understood perhaps the meaning of Avebury as a whole would be much clearer.

* Some preliminary carbon dating results from the current work taking place at Silbury are indicating that its construction probably commenced around 2400 BC which is much later than previously thought. This must inevitably alter our present perception of how the Avebury monuments evolved relative to each other. 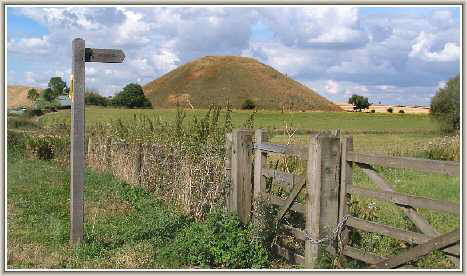 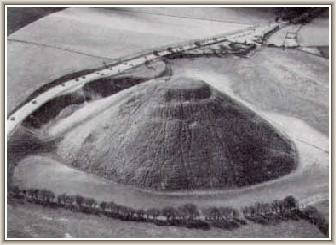 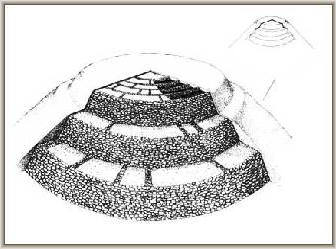 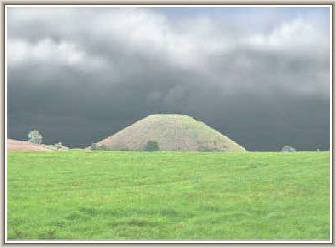 Any appraisal of Silbury Hill must take into consideration the fact that a few miles to the east and sitting incongruously in the grounds of Marlborough College is another huge man-made mound. Once of uncertain date the find of a cache of antler tines seems to indicate an origin in the Neolithic period.  Known as "Merlin's Mount" it is about 75 feet high. though not as massive as Silbury it still represents a substantial investment of man-power and is equally enigmatic regarding its purpose. 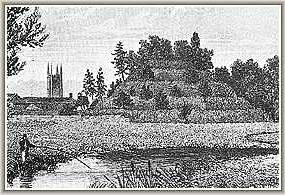 Early engraving of the Marlborough Mound

The two figures in this image give some idea of the scale of the damage caused by the hole that appeared on the summit of Silbury. It gave an unexpected view of the interior of the hill. 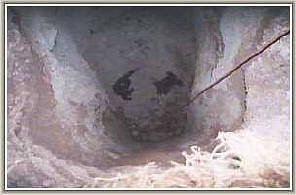 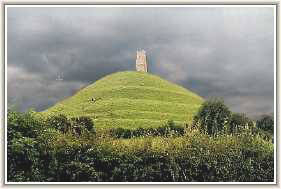 One of the most unusual and striking natural features in the English landscape must be the great hill that dominates the skyline of Glastonbury in Somerset. Known as the Tor one wonders whether its existence may, in some way, have been the inspiration for the building of Silbury. 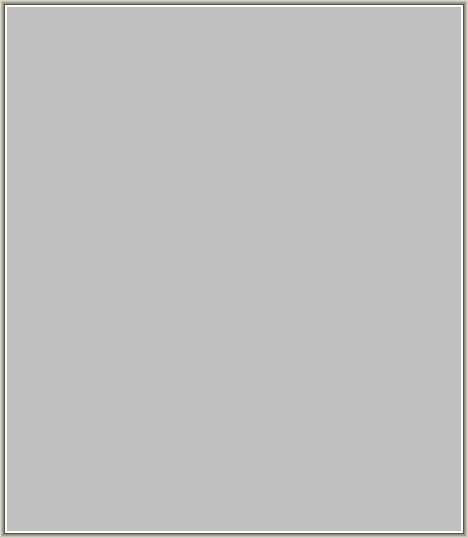 The BIG picture! (scroll to view) 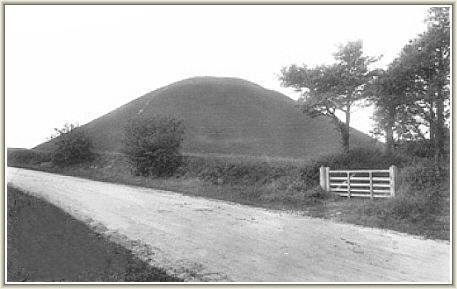 An old photograph of the hill circa 1902

This simplified cross-section of the hill reveals how much the original land may have been sculpted during the various stages of its construction. 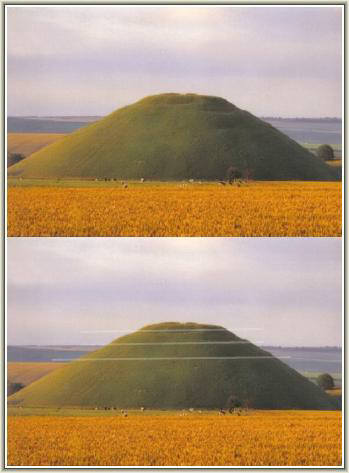 An old postcard view gives a hint of the spiral structure
now believed to be inherent in the hill's construction.

CLICK BUTTON for "The Silbaby Question"
A mound exists between Silbury Hill and West Kennet that has recently become a site of interest to researchers. Commonly referred to as "Silbaby" it awaits investigation to identify its true historical context.

At 130 feet high and covering an area in excess of 5 acres the enormous contours of the hill still challenge us with the mystery of why it was built and what for, but the solution to the mystery of how it has survived for 4,500 years without eroding away has been known from some early excavations.
As the diagram shows, the uppermost part was built as a series of drums each getting progressively smaller in diameter with increasing height. Each drum is about 17 feet in height with the outer wall leaning in at an angle for added stability. The inside of each drum consists of a series of radial walls similar to a spider's web which divide the drums into compartments each of which are filled with chalk the walls themselves having been built with chalk blocks. A recent survey of the hill now indicates that the drums are more in the form of polyhedra than circular and may have been built in such a way as to allow the "steps" to form a spiral trackway leading to its summit. The construction of Silbury demonstrates a high level of sophistication. This produces a further mystery...... How did the knowledge of building in this way arrive at Avebury? 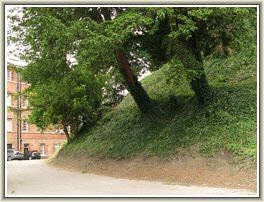 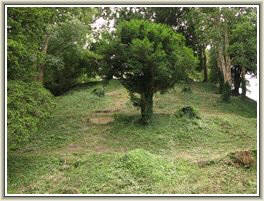 Of all the historical landmarks spread throughout the British Isles Silbury Hill is one of the most remarkable. Accepted as the largest man-made mound in pre-industrial Europe it has a symmetry that makes it seem almost modern....on seeing it for the first-time the uninformed visitor can get quite a surprise on learning of its antiquity.