The appearance of Avebury and the surrounding monuments to-day is still spectacular but it blends into the pastures and fields of the modern landscape with everything mostly covered in grass and the underlying chalk being barely in evidence........ How different Avebury's monuments must have looked when they were first completed. Silbury Hill must have appeared like a snow covered mountain, the ditch and bank of the Avebury circle also starkly white against the surrounding landscape. Likewise would have been the mounds of the long-barrows and tumuli that were commonplace in the area.

When looking at them all to-day it is easy to forget or not even to consider their once dramatic appearance which would have made them visible from a considerable distance.

Any visitor from afar whose home territory wasn't based on chalk would find them all the more impressive. Just how important this factor was to Avebury's creators or what efforts were made to maintain the appearance of their creations we'll never know. It could be, though, one of the main reasons why Avebury is where it is.

It is interesting to note that the earlier passage tomb of Newgrange in Ireland's Boyne Valley included a spectacular surround of white quartz when it was built. This quartz was quarried in the Wicklow Mountains some 50 miles away indicating that some Neolithic builders would make a great effort to give their constructions a white appearance.

Excavation of the three large henges at Thornborough in Yorkshire has revealed that the banks of these substantial earthworks were deliberately made to appear white by the application of layers of gypsum which had to be transported to the site(s). Whether this has any connection with Avebury is yet another question our Neolithic ancestors have left us to consider. 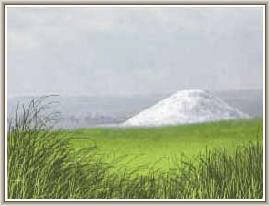 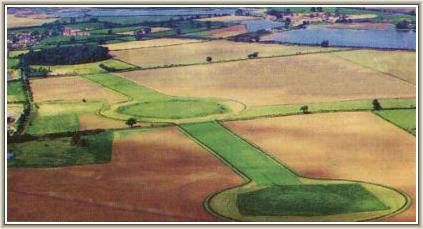 Threatened by extensive local quarrying the three massive henges at Thornborough (Yorkshire) are believed to be late Neolithic though
accurate dating has still to be achieved for much of the complex. 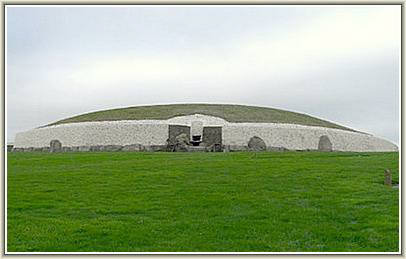 The spectacular mound of Newgrange with its surround of white quartz. 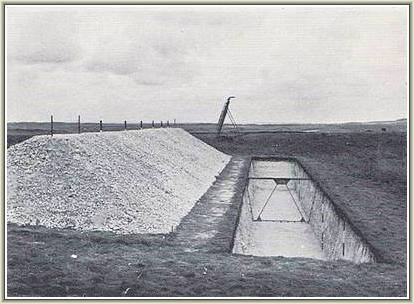 This experimental barrow was dug on Overton Down in 1960.....It is a perfect illustration of how the monuments must have once appeared.