The earliest published reference to this once disputed avenue appears to have been in 1732 by Thomas Twining who was the vicar of Chalfont in the Vale of Pewsey. He mentioned it in a pamphlet but the date of his observation remains unknown. The first person to record it in any detail was to be the antiquarian William Stukeley who made many drawings and notes when he visited Avebury during the 1720s though his work wasn't published until 1743. He described an avenue of stones similar to that of the West Kennet running from the henge to the west. Sadly this avenue was to become so decimated over the years after his visits that some later researchers doubted that it ever existed believing Stukeley to have been mistaken.

Happily the situation has now changed dramatically as an excavation by the Universities of Southampton, Leicester and Newport(Wales) in the vicinity of the Longstones during 1999 found the evidence of six stones in three parallel pairs. Three intact stones were found, two burning pits where stones had been destroyed and one pit where the stone had been removed. After many years of uncertainty Stukeley has now been vindicated. (Further research during 2000 revealed the evidence of two more stones belonging to the avenue. Unfortunately, like so many other Beckhampton stones, these have also been destroyed.). The width of the avenue and the spacing of the stones appear to be similar to the dimensions used in the West Kennet.

Such is the nature of Avebury that, although Stukeley indicated that it was greater in length, surveys and excavation during 2002 did not find any good evidence that the Beckhampton Avenue extends beyond the area of the Longstones. A large stone was found buried beside the A4 road in 1968 which initially seemed to confirm Stukeley's observations but now only adds some confusion to an issue that is still under debate.

These photographs show the Universities of Southampton, Leicester and Newport(Wales) engaged in the excavations of 1999 which were to confirm the existence of the Beckhampton Avenue.

Two stones of the Beckhampton Avenue at last revealed. 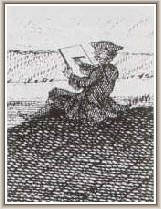 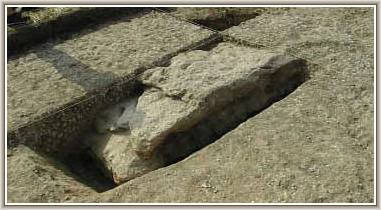 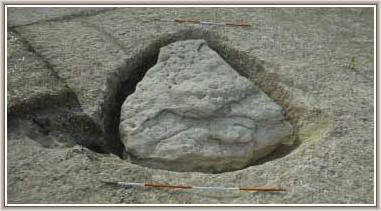 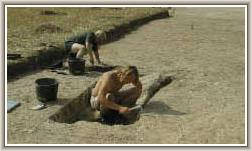 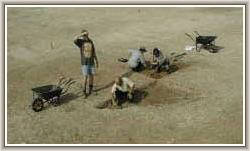 *MORE DISCOVERIES IN THE AVENUE.... SEPTEMBER 2003

Continuing excavation in the Longstones field by the Universities during September 2003 has found the burning pit where the partner to the avenue component of the Longstones had been destroyed. The evidence indicates that this particular stone was of no great size being almost certainly smaller than the only megalith of the Avenue that still stands. About 400 yards to the east of the Longstones another surviving stone of the Beckhampton Avenue has been found which was buried during the middle ages thus being saved from the fate many other avenue stones suffered. Adjacent to it a small pit was located in which a large number of flint flakes were found. This is thought to be an associated ritual offering. This now makes a total of 10 avenue stones for which evidence has been found during the series of excavations carried out over the past few years.

The burning pit being recorded

The newly discovered stone* buried during the middle ages

The partially excavated socket of the stone is in the foreground

*NEW FEATURE DISCOVERED NEAR THE LONGSTONES

A fresh excavation beyond the Longstones intended to establish whether the Avenue extended further has revealed a section of a previously unknown linear feature (visible as a darker area).

The feature appears to be a ditch of unknown length and date. At first it was believed to be either Neolithic or Bronze Age but continuing investigation has now found some analogies with the early Iron Age. Whatever the purpose of this exciting new discovery it shows that Avebury still has hidden secrets. Disappointingly (to this author) the excavation in this area has also failed to reveal any further evidence of the Beckhampton Avenue continuing beyond the Longstones.

*When fully revealed this has turned out to be one of the largest of all the Beckhampton Avenue stones which have been re-discovered in recent years and is an impressive example of a typical diamond-shaped "female"megalith. 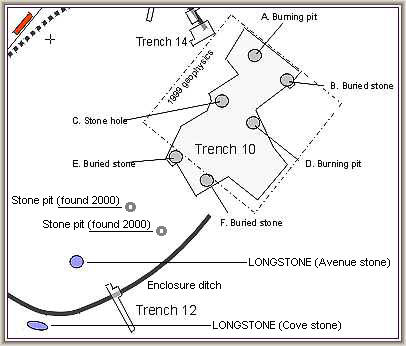 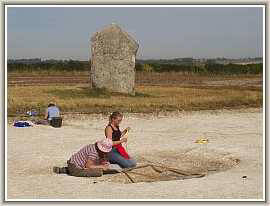 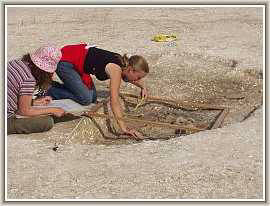 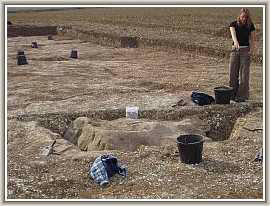 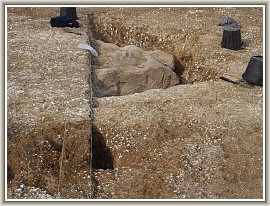 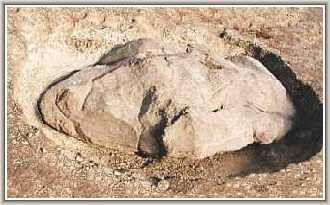 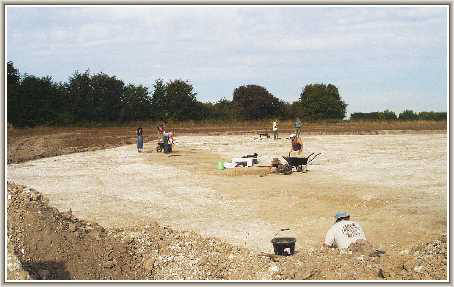 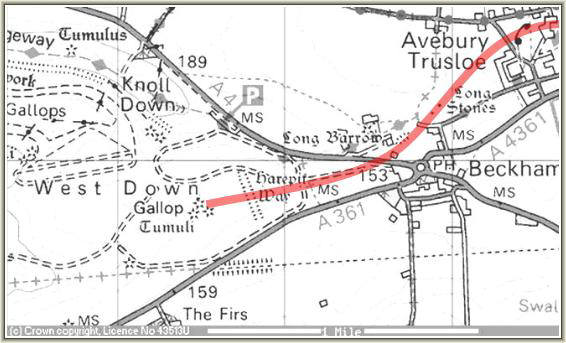 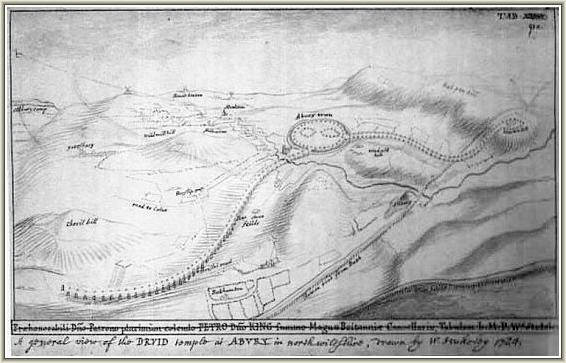 Stukeley's sketch of how he envisaged the terminal part of the avenue. 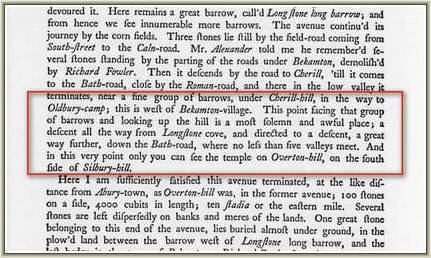 It is interesting to note that the re-discovery of the Sanctuary in 1930 by the Cunningtons was largely attributable to the above statement in Stukeley's book that "the temple on Overton-Hill" was visible from his assumed terminal point of the Beckhampton Avenue.

A recreation of the Beckhampton Avenue by Nicholas Mann can be found on the "Longstones" page.