For the sake of completeness a brief description of some unexplained stones not mentioned elsewhere but still associated with the henge are included here.

When Alexander Keiller was excavating the area of the north entrance he found the evidence of three stones, two of which lay just outside of the main outer circle. They don't appear to fit the general layout of the henge but it is considered that these may be evidence of a circle which was started but abandoned when it was decided to create the ditch and bank....Excavations in 1960 by Stuart Piggot failed to find evidence that this supposed circle was ever completed.

Situated between the stones of the southern inner circle and the stones of the south entrance Keiller also found the broken stump of a stone now known as "The Ring Stone" which he re-erected over its original pit. William Stukeley described this particular stone as containing a hole when he saw it.......... It doesn't seem to fit any plan and remains an enigma.
More recently in 1996 some parchmark evidence indicated that the Ring Stone may have had a partner lying about 20m to the west suggesting some symmetry with the nearby south entrance.

The stump of the "Ring Stone"is on the left.

Three concrete plinths to the left of the
"Swindon Stone"mark the positions of the
anomalous stones found at the north entrance. 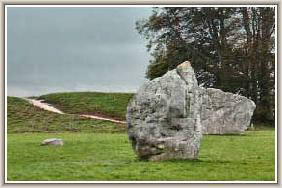 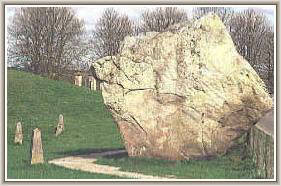 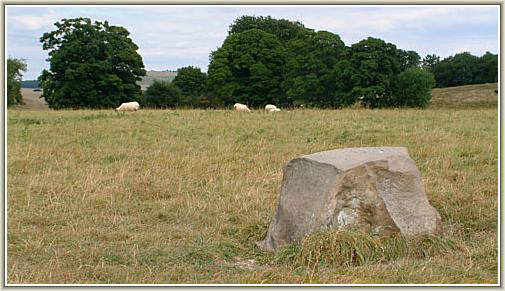 There are some other oddities that are worth a mention....Adjacent to stone no.103 of the southern inner circle Keiller erected a plinth where a stone designated "D" once existed. It is some distance from the "Z Feature" and remains a mystery. Fragments found in the hole in which it was set were associated with the Beaker Folk thus indicating that it was a later addition to the henge. Stukeley recorded some odd stones to the east of the north entrance, both in the ditch and on the edge of the bank. These are now accepted to have been fragments of the Swindon Stone's massive partner which met its demise around 1722 when it fell and was destroyed. Interestingly there are still  a number of small stones now forming a wall-like feature at this location. 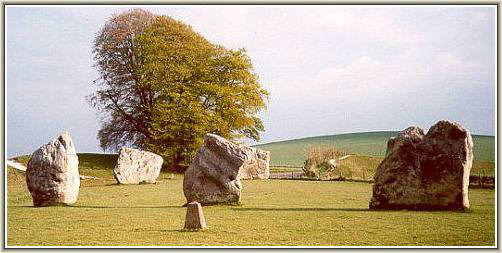 An unexplained stone recorded by William Stukeley in the NW quadrant

In the north-west quadrant of the outer circle Stukeley also recorded another unexplained stone on his 1724 plan of the henge which Keiller tried to verify without success. This was a few yards inside the outer circle of stones adjacent to the area where stone no.34 now stands.

On his plan of the henge William Stukeley recorded a stone to the east of the Cove in the Northern Inner Circle. Confusingly he marks it as having been removed or destroyed in 1714 though in the same area a stone (or stones) remain just visible above the ground. He believed it was evidence of a smaller inner circle that surrounded the Cove though recent geophysical surveys have been unable to support his theory. The stone has been recorded as being broken into three pieces though there is some dispute whether it is in fact the stone recorded by Stukeley or a group of separate stones belonging to another feature that has some similarities to the Z Feature in the southern inner circle. This area of the henge is perhaps long overdue some more thorough investigation. 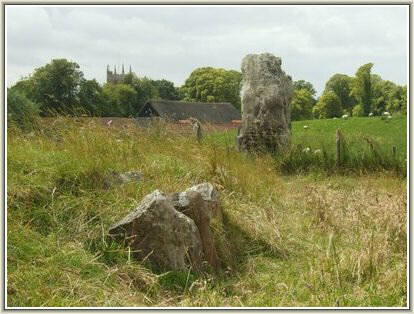 With the "Swindon Stone" in the background stone fragments,  which may be from its destroyed partner,  still exist at the north entrance to the Henge. 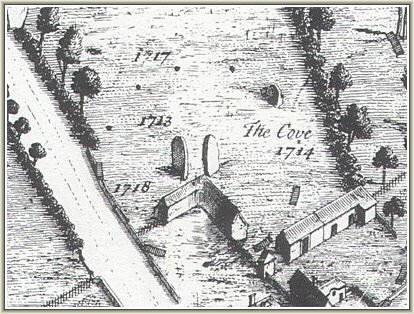 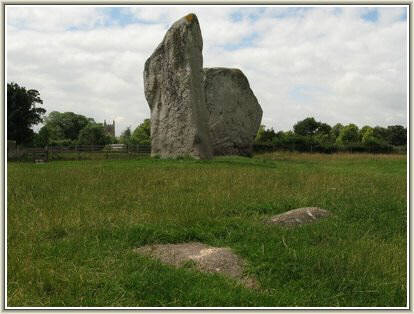 William Stukeley's plan of the henge shows a stone removed in 1714 that once existed to the east of the Cove though in the same area  stones  are still visible peeping through the grass in this photograph.