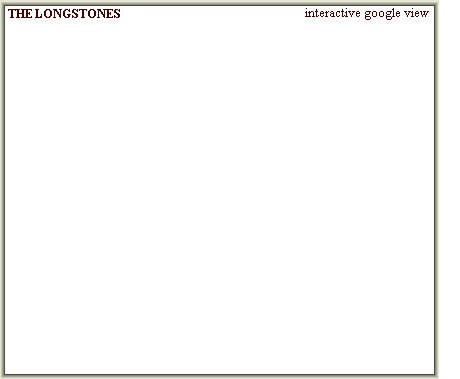 About a mile outside the main circle of the henge and on the line of the Beckhampton Avenue stand two large stones. With some interesting lichens adorning their surface they are known as the Longstones (also known locally as"Adam & Eve"). The larger of them, according to a drawing made by William Stukeley, is the surviving component of a cove similar in structure to that in the north circle of the henge; the other belongs to the avenue. Recent excavations have confirmed the existence of this cove.

It appears on Stukeley's drawing that this cove was complete not very long before he visited it but according to his notes it was already being destroyed by the now infamous Richard Fowler "of the Hare & Hounds Inn" who was to draw the wrath of Stukeley on more than one occasion for his wanton and regrettable destruction of Avebury. An element of this cove of which Stukeley was probably unaware was found during an excavation in 2000. It was a vast stonehole where a massive but now destroyed blocking stone had once existed.

Recent excavations in the area around the Longstones also found the evidence of a sizeable, but long disappeared, enclosure. This has been dated at about 2900 - 2700 BC which is the same period as the first phase of the ditch and bank that surrounds the henge.

The Longstone Cove, unlike the cove of the henge, appears to have been aligned upon the mid- winter sunrise. Its relationship to the rest of the henge now seems to be quite significant as the latest survey of the area around the Longstones indicates that the cove may be the terminal point of the Beckhampton Avenue. Quite how this cove was used in relationship to the rest of the monument remains a mystery complicated further by the possibility that another cove once existed in the West Kennet Avenue. It would seem logical to assume that the mid-winter solstice was far more likely to be a time of rejoicing for our Neolithic ancestors than that of mid-summer as it signalled the beginning of the sun oncemore climbing higher in the sky and the coming of spring. Many researchers are now accepting that the design of Stonehenge is primarily orientated on the mid-winter sunset and the current popularity of using it to celebrate the sunrise at mid-summer is born of a modern ignorance of Neolithic culture.see Further evidence of the importance of the winter solstice is the magnificent passage tomb of Newgrange in Ireland which is aligned very accurately to the event and predates Avebury by several hundred years. Of the components that make up the Avebury henge the Longstone Cove may have been one of the most important to its builders.

The Longstones as they are today 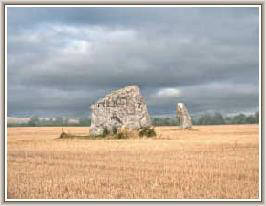 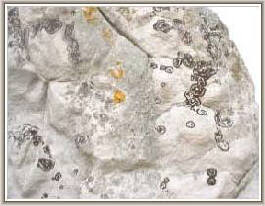 Two features of the Avebury complex which are often overlooked are within a few hundred metres of the Longstones. They are the remains of two long barrows. Built much earlier than the henge and avenues they are associated with the Windmill Hill culture. The Beckhampton Long Barrow lies to the south-west and is dated at around 3200BC. Once very overgrown it has now been cleared of the obscuring vegetation that hid its outline. It is still a substantial earthwork that is well worth a visit. South Street Long Barrow lies to the east and is dated at around 3400BC. However, this has
all but disappeared now after being subjected to constant agriculture. Whether their existence had any influence on the position of the Longstone Cove or the course of the Beckhampton Avenue remains a subject of debate. 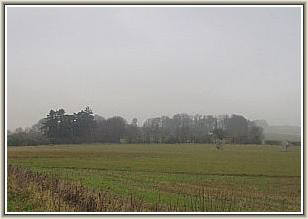 The South Street Long Barrow
has all but disappeared. A slight
rise in the field level (visible on
the left) is all that remains. The
Longstones are to the right. 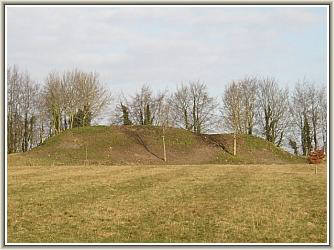 Diagram showing the position of the recently discovered enclosure relative to the Longstones and Beckhampton Avenue. 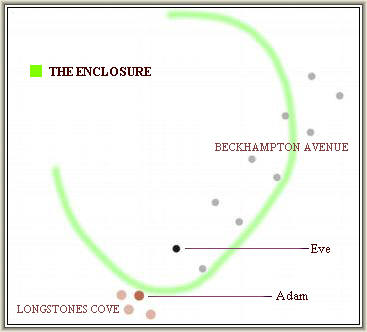 A drama befell the Longstones in 1911 when "Adam", the massive cove stone, fell down. Fortunately it was to be re-erected the following year under the direction of Maud Cunnington and her husband Benjamin who were the most active archaeologists in the area at that time. They, like Keiller some 25 years later in the henge, were to set the stone in concrete which will hopefully keep it upright for the next 5,000 years!.....Interestingly this re-erection took four weeks to complete. After initial failures using powerful jacks and traction engines borrowed from the Great Western Railway Company a more traditional method was found using timber and wedges that eventually finished the task. The process gave some insight into just how amazingly accomplished the original builders must have been at manipulating such massive stones. 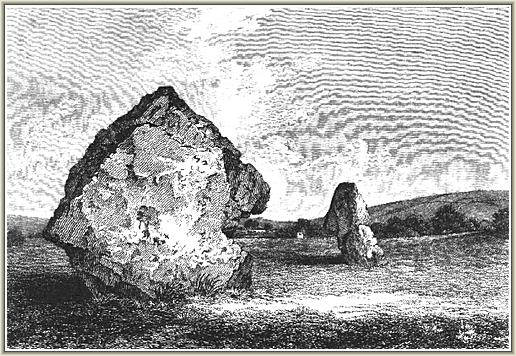 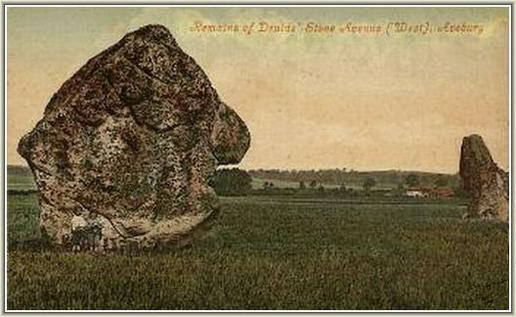 Of interest is this old postcard (believed to be early 1900's). It is very similar to the Colt Hoare drawing above and shows the massive "Adam" as being more upright and higher relative to ground level than it is now. The Cunnington restoration after its 1911collapse appears to have changed the stone's original aspect. It is suggested on the "Entrance Stones" page that the stones of the south entrance in the henge may have once appeared more like the "Swindon Stone"....These earlier images of "Adam" perhaps re-inforce that suggestion. It also causes one to consider whether the "female" component of the cove in the northern inner circle of the henge has now lost its original orientation. 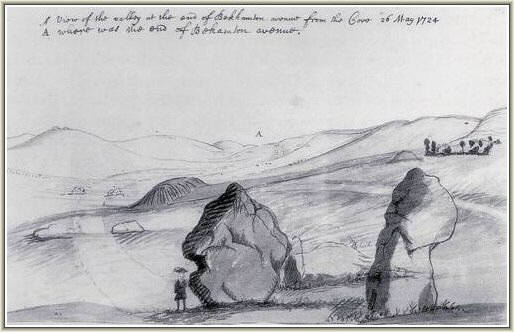 This nice recreation of how the complete Longstones Cove may have originally appeared in relationship to the Beckhampton Avenue is from Nicholas Mann's book "Avebury Cosmos".
scroll to view.... (courtesy of Nicholas Mann) 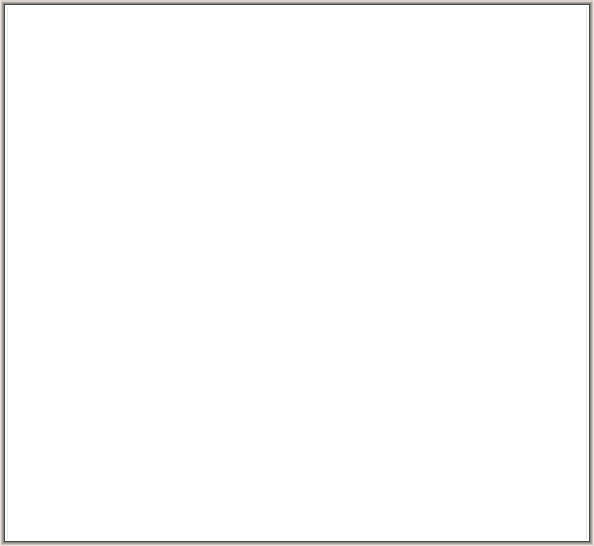