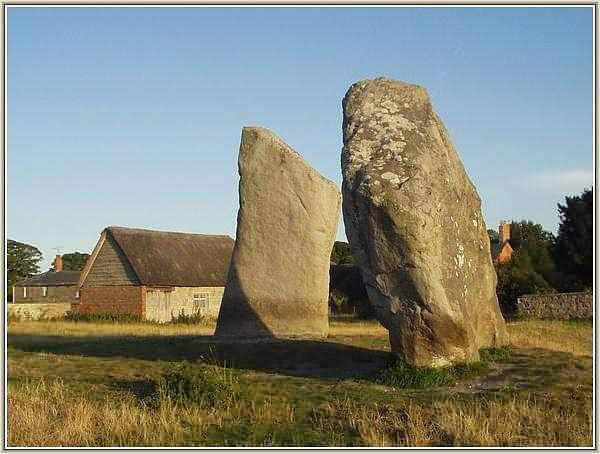 Anyone who knows Avebury Henge well must be very familiar with the two cove stones contained within the remnants of the northern inner circle which are amongst the largest and finest stones of the whole monument. It has long been accepted that the stones of Avebury represent male and female characteristics with the two surviving cove stones being perfect examples of the types chosen. At the north side there once was a third stone which completed the cove and faced the existing slender "male" stone. This fell in 1713 and was destroyed. 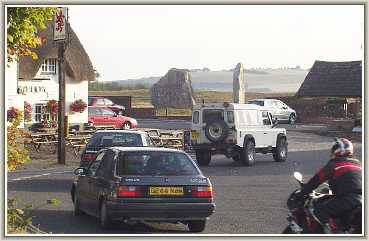 Recently the Cove stones have undergone work to stabilise them. During this process excavation has revealed that the stones are set far deeper in the ground than had been previously thought which makes them substantially larger than earlier estimates allowed. It is now thought that the "female" component may possibly approach 100 tons in weight and can be considered as the most massive surviving stone of the monument.

Witnesses to 5000 years of history the stones of the Cove
watch the passing of modern traffic through the village. 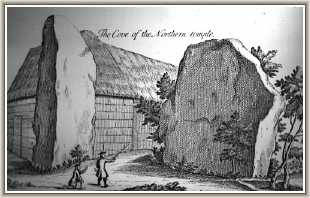 A drawing that William Stukeley
made of the Cove circa.1720 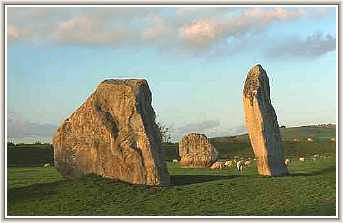 CLICK HERE FOR A
PANORAMIC IMAGE
OF THE COVE QUADRANT

NOTE: The 300K versions are most suitable for broadband users as
download time with a 56K modem
is usually 1-2 minutes. 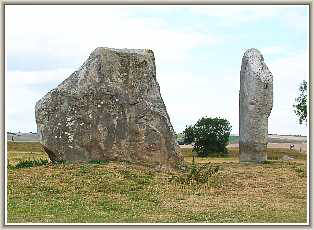 As a result of safety concerns the "male" component of the Cove has now been adjusted to a more upright position as can be seen on this recent image when compared to the earlier photograph near the top of the page. This is the first major alteration to the appearance of the henge since Alexander Keiller carried out his restoration in the 1930's. 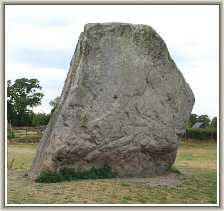 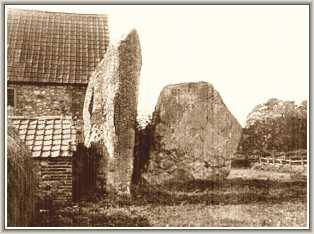 Old photographs of the Cove circa 1899. When compared with the image at the top of this page it would seem that much of the recently corrected lean had occurred over the past 100 years (possibly a consequence of the adjacent buildings being removed and/or vibrations from the ever increasing cars and heavy lorries on the adjacent road). This implies that a potential disaster may have only just been avoided. 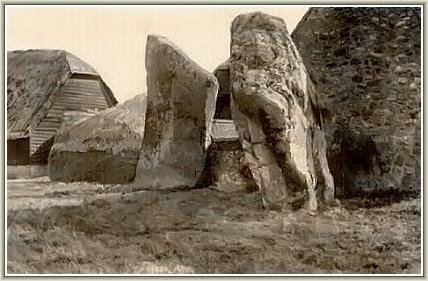 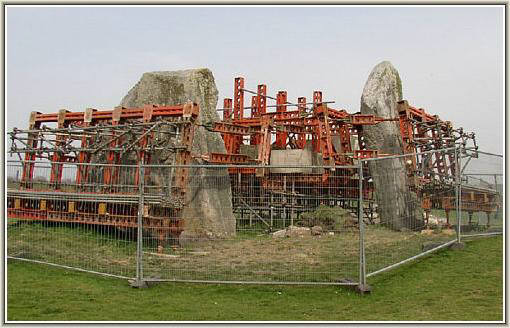 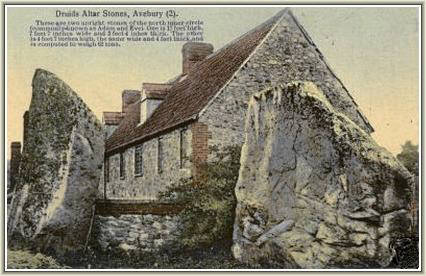 An early 20th Century postcard of the Cove 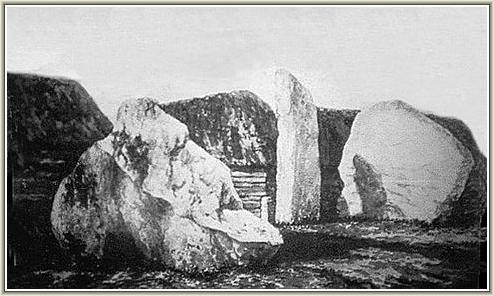 Stone F appears on this watercolour by J. Browne dated 1825....It is reported to have been removed in 1828 using gunpowder as it was obstructing a gateway!

Pre-adjustment image of the Cove. Although a very neccessary procedure the stones have now lost the pleasing symmetry they previously had.

Constructed about 3000BC the coves have been found to be the earliest of the components that form the henge. As well as that within the north circle there is another in the Beckhampton Avenue and evidence that another may have existed in the West Kennet Avenue. Researchers believe that they were representations of the forecourts and stone chambers that were a part of the long barrows and tombs of earlier years thus they would have had funerary rituals associated with them. They appear to be the foundations on which the rest of the henge was built. That of the northern circle must have been fundamental to the function of the whole monument. As with so much at Avebury it is a pity it hasn't survived in its entirety so that we can get a clearer sense of its enormity and importance to those who laboured in its construction.

A short distance to the east a stone (designated stone F) was recorded by both John Aubrey and William Stukeley. Now missing it has been suggested that it may have contributed to the function of the cove. As the cove appears to be orientated toward the position of the rising sun at midsummer it has been suggested that this stone may have acted like a gnomon casting its shadow onto the existing female megalith and revealing the moment of the solstice. This may have been one of its uses but the main purpose of such a massive construction as the cove must have been more deeply connected to the beliefs of its builders.

Although there are only four stones of the northern inner circle now visible a survey in 1881 by A.C.Smith using probing rods located two more which remain buried.

It is perhaps interesting to here consider that the earliest form of the Sanctuary on Overton Hill (a mile & a half distant) was being constructed at about the same time as the Cove. They were to become linked 600 years later via the Henge and West Kennet Avenue. 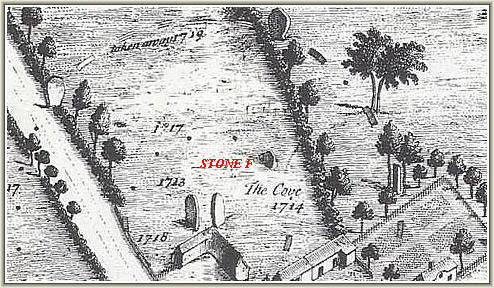 It has been suggested that this stone may have already been in situ due to its size and the large portion of it buried in the ground. If this was the case the implications for interpreting how the henge was built and located are considerable.