An Avebury researcher enquired of this author as to whether the Obelisk would have been visible
from the top of Silbury Hill. I assessed that, when standing at the position of the Obelisk, the top
of Silbury is obscured by one of the outer stones of the Southern Inner Circle. To resolve the
query I decided to elevate a camera to the imagined height of the now missing stone and take a
photograph in the direction of Silbury. Given that William Stukeley measured the stone's length at
21 feet I deduced that at least 4 feet must have been in the ground for it to have been stable which
gives a maximum permissable height of 17 feet which is the level at which the image was taken.
The outer bank of the monument must now be substantially lower than when it was first built but it
looks likely that it wouldn't have been sufficiently high to have prevented the top of the Obelisk
being visible from Silbury Hill. In 1762 material was removed from this section of the bank to raise
the level of the road thus further reducing the height of the currently visible earthwork. 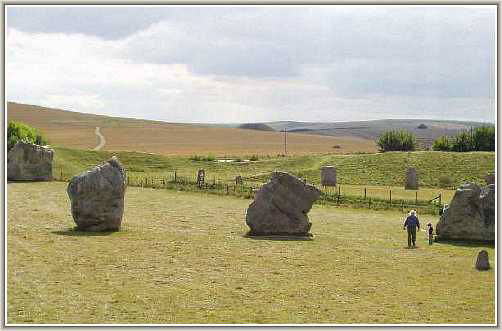 It is interesting to see how the top of Silbury is level with the distant horizon.
The scar created by the 1762 mutilation of the outer bank is very obvious. 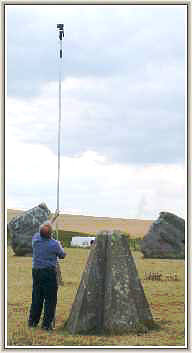 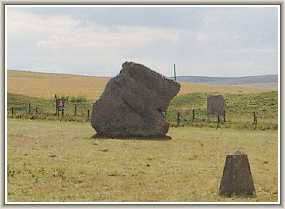 Taking the picture....the height of the camera gives some idea of how tall the Obelisk might possibly have appeared